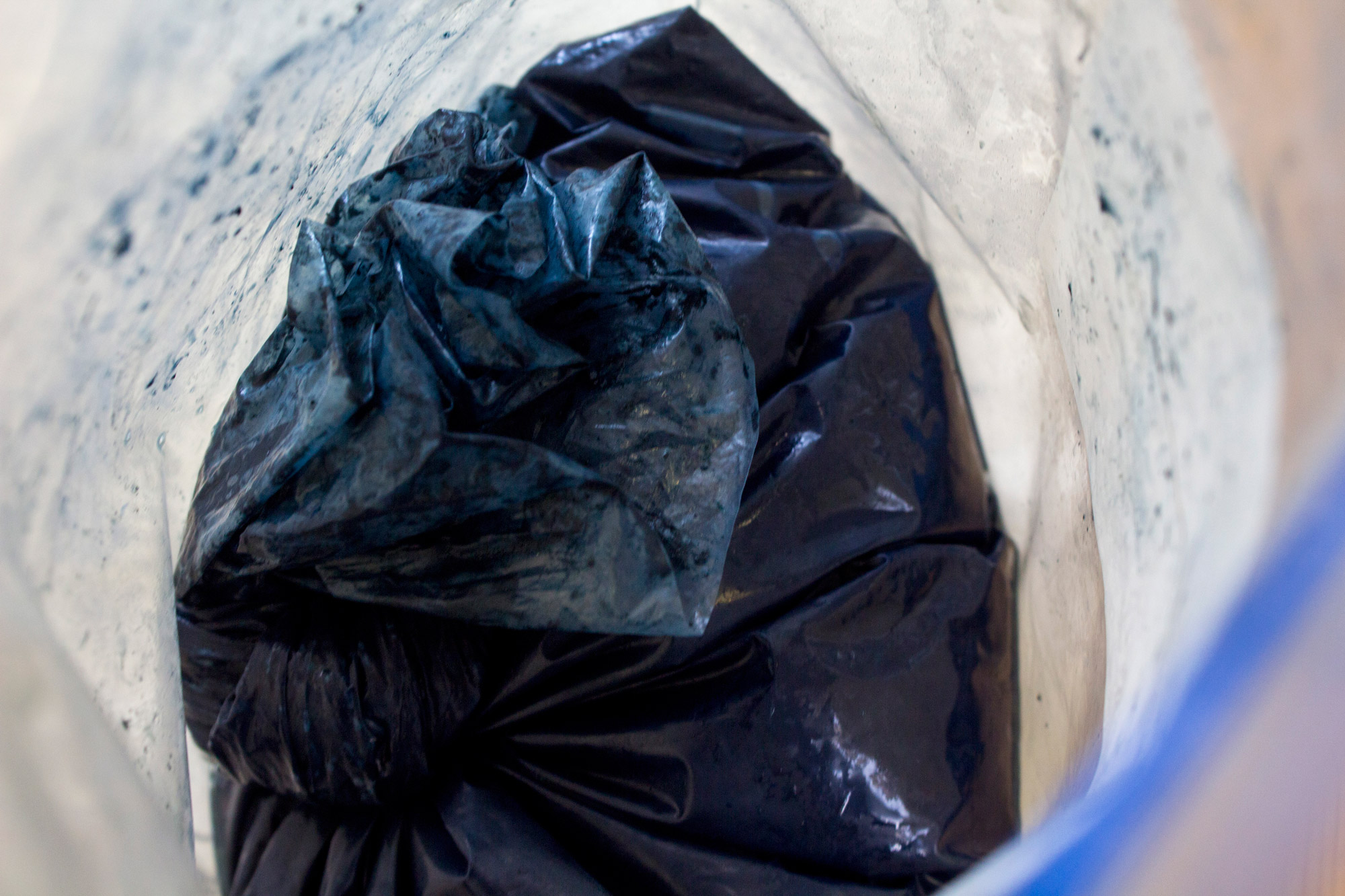 To understand the process of cultural transformation that took place in each “in-between” means to me that I have to get in touch with the past from the daily life of the present, and from there create a new base of perception, a new history.

Kentaro Yokouchi (Japan 1979) was our artist in residence during the period July to September 2020.

His research addresses various historiographical aspects in relation to the use of indigo as a natural dye and other aspects of this material, especially the interaction of Japanese, Indonesian and Dutch cultures with respect to its production, use and commercialization.

Kentaro has a special interest in the use of ancient techniques and historical images that allow a new poetic meeting of cultures, thus reestablishing bridges and rapprochements between Eastern and Western art. Furthermore, he reveals traces of links between images from the past, whose voices and silent gestures point to a different configuration of our human condition.

We share this brief interview with Kentaro, to learn a little more about his time in the Netherlands, his life, his work and his stay at airWG.

How did you become an artist, what is the most relevant experience or memory from your beginnings until today, and what prompted you to this precarious practice?

When I was a teenager, I was interested in a non-verbal field – the visual and physical – rather than the usual verbal work. That’s what inspired me to pursue a career in art. But again, we live in a world of words, and I am interested in languages because they contain the essence of our culture. I’m also very interested in writing and action in a way that feels like crossing the border into another language and migrating. And, of course, I have met some of my respected artist-teachers. I was fortunate enough to be associated with a gallery during my PhD course that I continue to exhibit into this day.

Can you tell us about the research you conducted in the framework of your PhD trajectory? In which way has this so-called the third cycle, changed your work and professional practice?

For me, the doctoral program was about finding the backbone or core research of an artist. The keywords and concepts derived from the idea of transformation showed me that this research has so much potential to cover a wide range of human cultural traces and expressive activities. Specific descriptions include my use of the technique of suspending judgment by inverting light and color, the affirmation of inevitable acculturation, and changes in technology and language. I now use the concept of “grafting” which has a more life-like meaning from this. Being professional makes me more freedom for myself. (By the way, the PhD program in Japan has become common in the early 2000s at various art universities.)

You moved from Japan to Indonesia, and now you are in the Netherlands. We wonder what has happened on these journeys, in particular “between” places, histories, languages and merchant routes, in which way have these transits transformed or intervened in your artistic strategies and processes?

To understand the process of cultural transformation that took place in each “in-between” means to me that I have to get in touch with the past from the daily life of the present, and from there create a new base of perception, a new history. The experiences of places, objects and people, including memories of wars, become a route for me to receive and multiply new knowledge systems. Wherever I am, I still feel like a stranger, half an immigrant. However, as a result of actually moving around, the soil and climate that give birth to the unique culture of a place seem to become part of my being, little by little. I believe that the experiences that are embodied in my mind create a form of expression with a sense of reality. Even if it happened 300 years ago, it will feel close to me. From there, I am conscious of throwing expressions beyond the present day.

You started an artist residency program in Indonesia. What is the goal and vision behind the residency?

One of the reasons is that the current economic disparity makes it possible for me to live in Indonesia, so I thought what better way to give back to young local artists and those who are involved with me. On the other hand, I was inspired by Indonesian artists who have multiple roles in their practice, such as curator, so I wanted to run my own space. The first thing I do is to bridge the gap between Japan and Indonesia, so I give language lessons and help artists from outside the country with their research in the field. We can also share our skills and ideas with each other through exchange presentations such as exhibitions and talks, with the idea of improving our lives and where we are now. We take pride in the fact that it is through me and you that we are nurturing the culture of the future.

In describing your practice so far, you spoke about your interest in cultures. When you research cultures, are you interested in the prevailing concepts in contemporary Western discourses? As identity, post colonialism and sociopolitical agency of artists. Or aspire to bring different voices and artistic starting points to the discourse? What are these voices or other points of view?

Of course, I am no exception, and I am influenced by a variety of Western and Eastern concepts and wisdom. I think it is important to think in a post-colonial and post-conditions way, but personally, I don’t think of it as addressing expression in the scope of identity politics. My main approach is to think simultaneously about events occurring in the present time and boundary plane and the humanity that humanity possesses. In other words, it is about learning, reinterpreting and using historical examples, materials and techniques. That’s what I want to understand more about what my paintings are, even in the world of words.

In your recent works you focus on indigo. Why indigo?

Indigo is a historical plant that has been grown in many places, including India, Indonesia and Japan. A range of conditions – history, technology, craft, trade and labor – are superimposed on this indigo base, and it is a natural progression that I embrace in my painting. The concept is interesting, but also as a material, the lime content of the paste is very similar to the textures of western expressions such as absorbent ground or a fresco. Despite being of local plants’ origin. What is most important in my work is the feel of transformation that comes with a sense of reality and physicality. What is interesting to me is the vision of hybridity, where indigo as a local color is connected and mixed with expressions from all over the world.

What does the Dutch artistic and historic landscape – and in particular Amsterdam and airWG – offer to your artistic investigations? What do you intend to make whilst you are the resident artist at airWG?

The Netherlands’ trade in VOC took them to various parts of Asia from the 17th century onward, and they introduced to Japan a different perception of the human world, including medicine and natural science, as well as Western conventions and diets, as part of their new technology. One of the techniques was the expression of painting. Information on techniques used in printmaking and oil painting, such as shading and perspective to enhance the sense of reality, came mainly from books. I’m interested in how I, currently in the Netherlands, can respond to the phenomena that Japanese painters painted at that time from one of those books, Human Occupation. I am developing an expression here that is a combination of this and the aforementioned research on Indigo. I am also an A.I.R organizer in Indonesia, so I am learning a lot of examples from airWG’s own management system and so on, while learning about the activities of the artists who use the studio and creating a good relationship with them. The environment in which I was able to make these activities happen and, most importantly, the support of the residency team gave me the pleasure of my first extended stay in the Netherlands. It is also very meaningful for my future work as an artist to be able to share the results of my stay with you in the form of an exhibition as the final presentation.

we live in a world of words, and I am interested in languages because they contain the essence of our culture.